Iowa Route 92 is one of the main east-west highways spanning Iowa, serving the third row of counties from the southern border of the state. (The bottom row of counties is skewered by Iowa Route 2, and the second row of counties by US Route 34.)  Iowa Route 92 is the central part of a tri-state "Route 92"; the western end crosses the Missouri River to become Nebraska Route 92, and the eastern end crosses the Mississippi River to become Illinois Route 92.  In greater specifics, the western end is a bridge carrying Iowa Route 92 and US Route 275 from Council Bluffs into Omaha, Nebraska. The eastern end leaves Muscatine, Iowa for Illinois via a bridge over the Mississippi River. 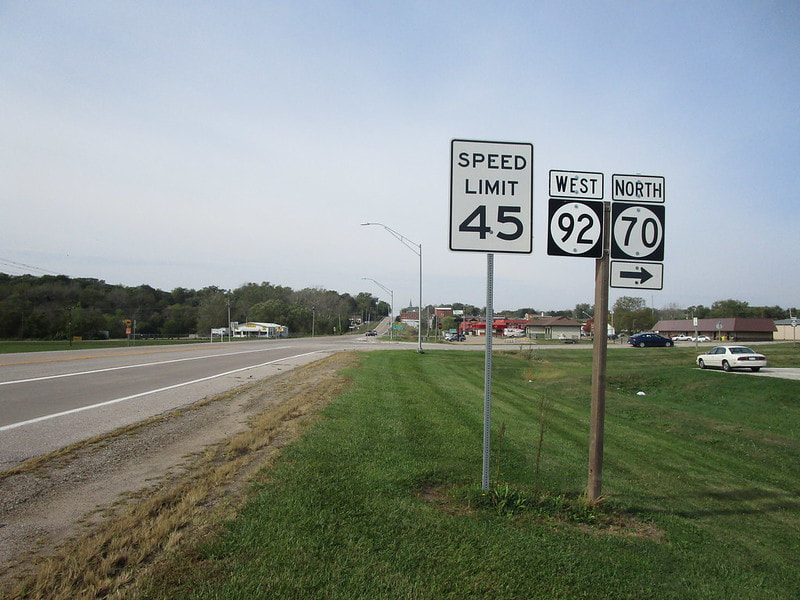 My photo of Iowa Route 92 is an incomplete guide assembly in Columbus Junction at Iowa Route 70.  The guide assembly shown, facing east for westbound traffic on Iowa Route 92, is missing the ahead arrow under the Iowa Route 92 marker.  (It might have fallen off because Iowa likes to use forward arrow panels that are 24 inches tall and only 12 inches wide; attaching that narrow panel to the panel above would have created a weak connection.) This junction in the photo is the southern end of Iowa Route 70.  My first trip to Iowa in 2017 took me to this intersection, but I also passed through here in October 2021 during my trip across the southern part of the state. This photo came from my second jaunt through this area in October 2021; I kicked off this trip by clinching Iowa Route 70 from north to south.
Back to the Iowa main page.
Back to the home page.