Rocky Mountain National Park is a popular place to experience the towering mountains and the scenic vistas. With easy vehicle access to areas above 12,000 feet, breathtaking mountain views can be enjoyed by those young and old.  The boundless and extensive trails stretching across the park allow visitors the opportunity to stay at the park for weeks without running out of things to see.  It's simply one of the best places to experience the Colorado Rockies (the mountains, not the baseball team).  Trails and roads in the park allow visitors to even ascend above the tree line into the tundra, where limited species of plants of animals can get by.  Trails are often strenuous because of the dramatic changes in terrain.

My visit to Rocky Mountain National Park in August 2022 will be shared in five parts.  First, the hike to Gem Lake occurred in the northeastern portion of the park, north of Estes Park.  The second part was the drive down the Old Fall River Road, which is a gravel one-way road along the rushing, clear waters of the Fall River.  Part three was the mountain hike up Estes Cone; I always try to include a challenging hike up a mountain when possible.  Fourth was the hike to Emerald Lake, and fifth was the hike to Lake Haiyaha; both of these lake hikes took place in the high-demand area down Bear Lake Road.

Part 1: The Hike To Gem Lake

As a flatlander, I need time to become acquainted to the thinner mountain air found at the higher elevations.  As such, I decided to start with an easier hike, leaving from the Lumpy Ridge Trailhead on the north side of Estes Park. That hike led to Gem Lake, only a few miles away from the car.

About halfway up the trail is a rock that a lady referred to as "Paul Bunyon's boot".  I don't know if that's an official name in any way, but it's suitable enough!​
And now, for the goal of the entire hike: it's Gem Lake! 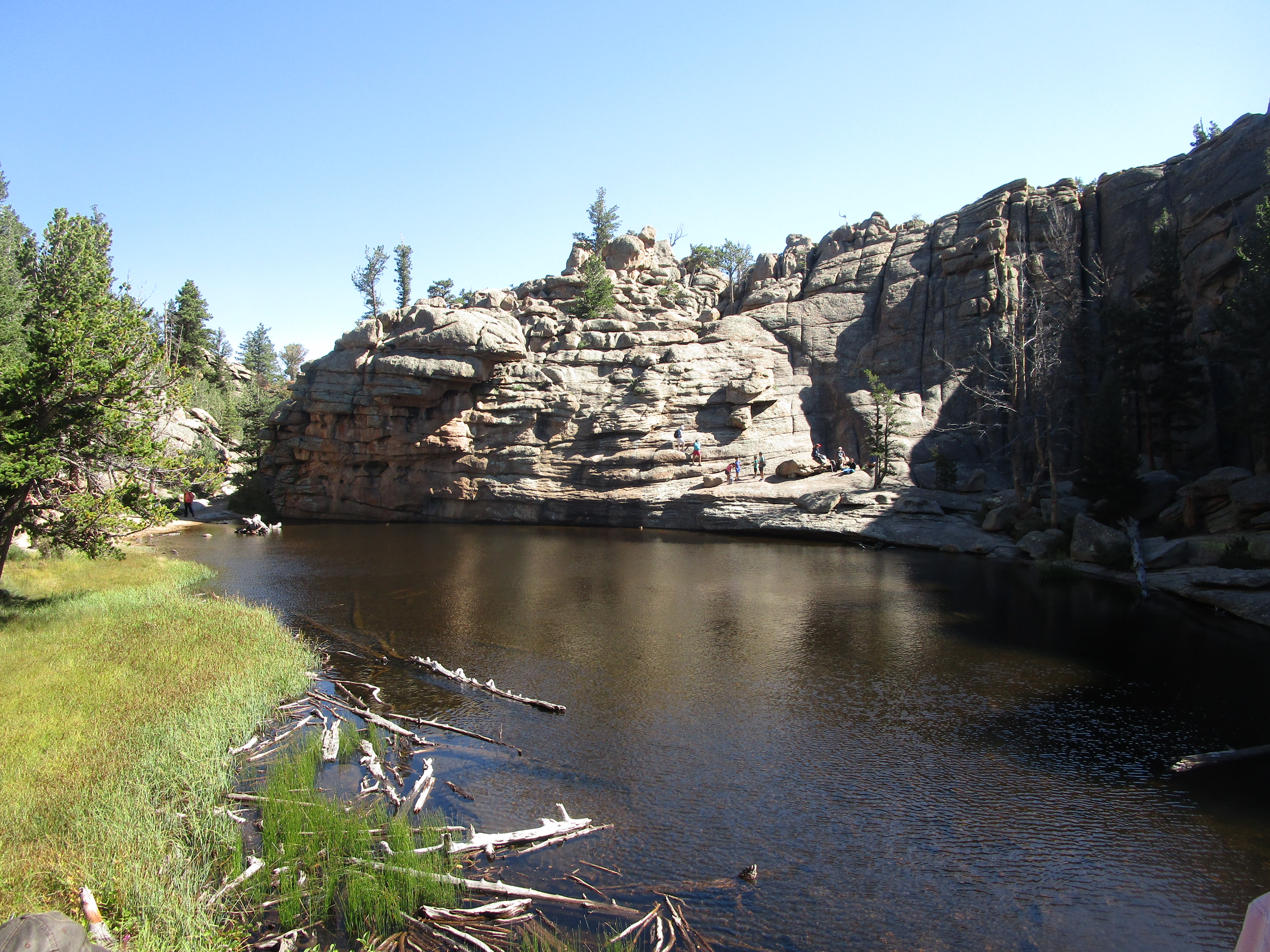 Here's a chipmunk that almost found its way into my backpack.  Be forewarned, as the chipmunks in Rocky Mountain National Park have no respect for anyone's personal space. 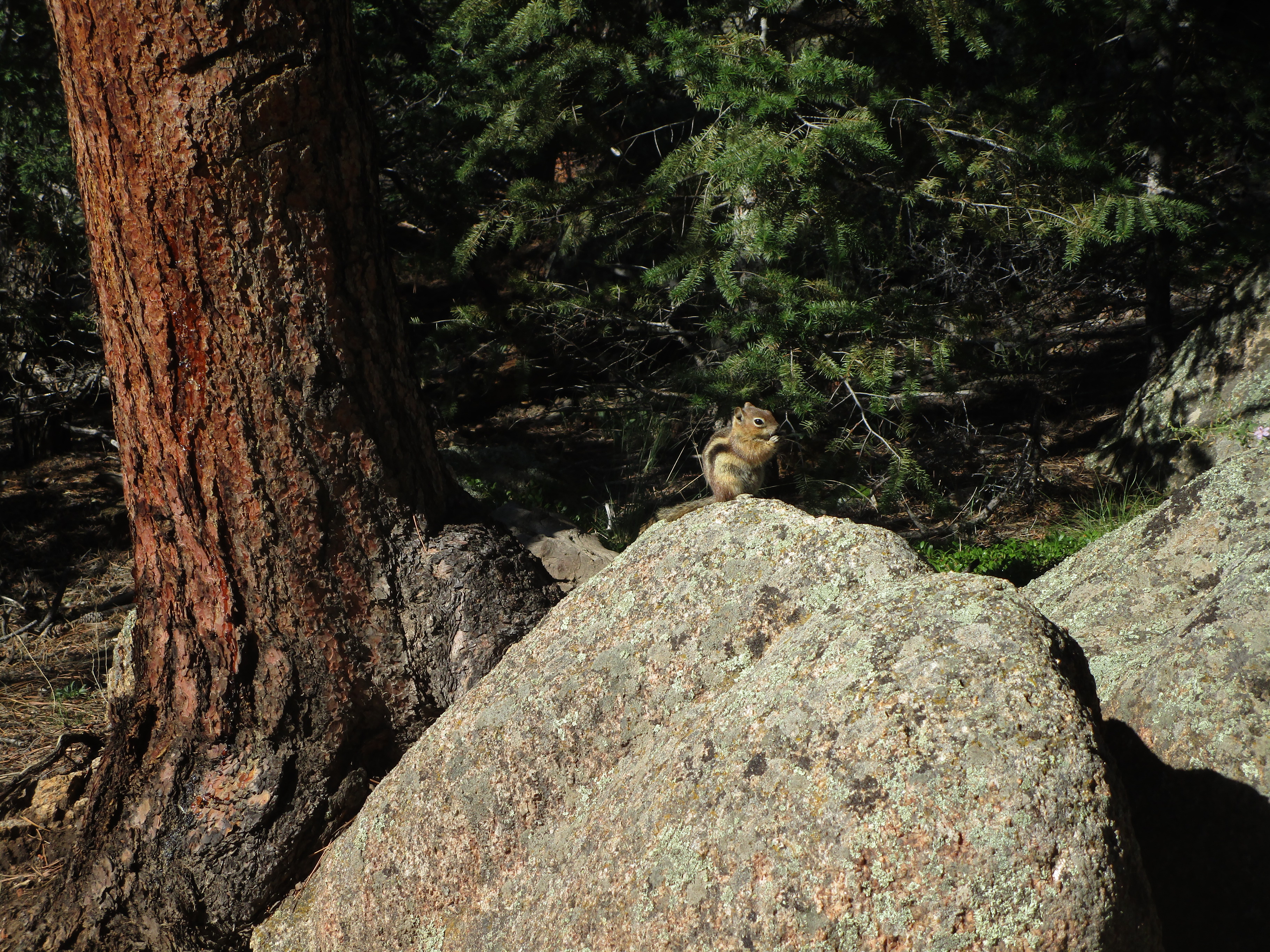 ​After hiking Gem Lake, we spent the rest of the day driving down the one-lane gravel road along Fall River.  This is the Old Fall River Road, an alternate to the Trail Ridge Road, which is the main road through the park (carrying US Route 34).  The road is one-way, and it is gravel; however, traversing the road is possible with just a sedan.  The Toyota Camry I rented did a perfectly acceptable job.  Our first stop along the Old Fall River Road was the Alluvial Fan area.  A flood several years ago caused a massive washout to careen down the mountain, and it carved a new path for a mountain stream.  That stream runs down Horseshoe Falls, which is an easy walk from the parking lot.  It's so accessible, in fact, that the path meets ADA standards! 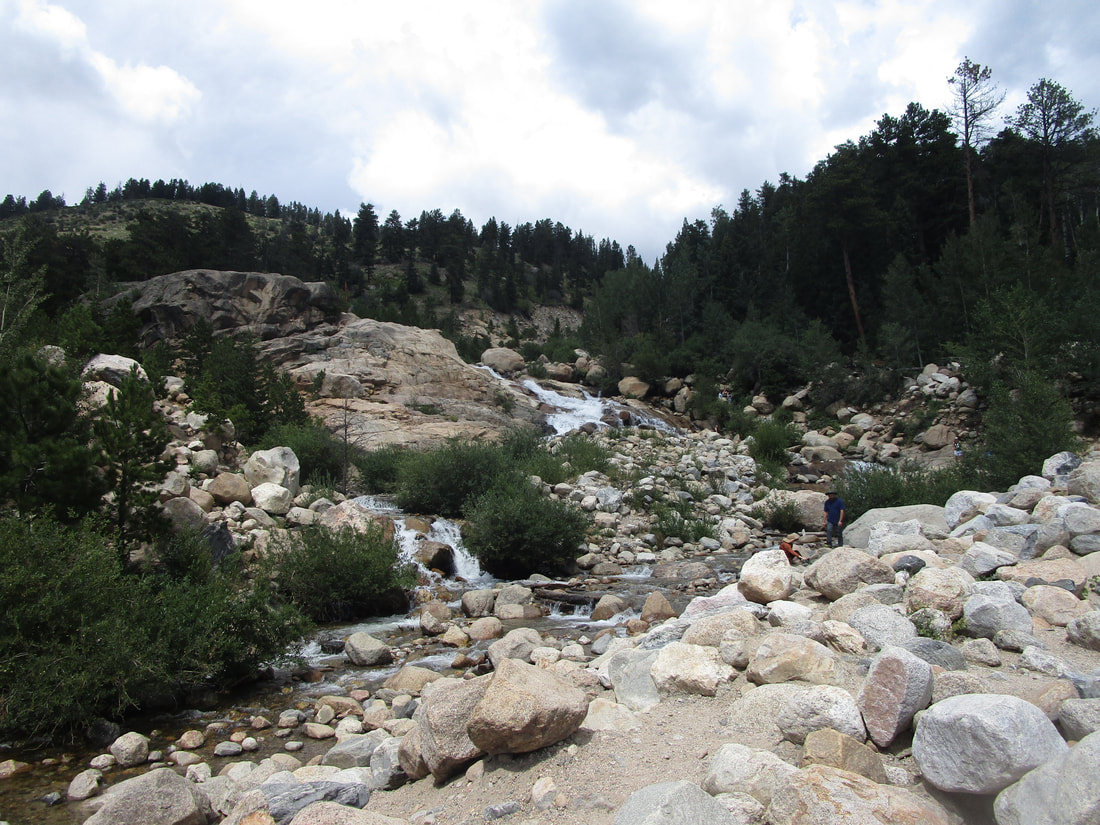 We proceeded farther down the gravel road, finding this unnamed waterfall tucked behind a few trees:

This waterfall is a marked stop along the gravel road, and its name is "Chasm Falls".  That waterfall appears on the left, below; the photo on the right is a view looking back down the valley to the east.  The Old Fall River Road is one-way, only allowing travel to the west, so the view is looking backwards.
The Old Fall River Road is overall an upward climb. That doesn't mean it's too steep for your car to handle; what it does mean is that travelers eventually end up in some of the highest elevations in the park.  The Old Fall River Road empties into the parking lot at the Alpine Visitor Center, which sits almost 12,000 feet above sea level.  Toward the end of the one-way gravel road, you will find yourself above the tree line with some snowy patches within sight! We also saw this male elk grazing nearby.

That concludes the journey down Old Fall River Road.  The end of the road funnels into the parking lot at the Alpine Visitor Center, where we caught this distant view of a whole herd of elk: 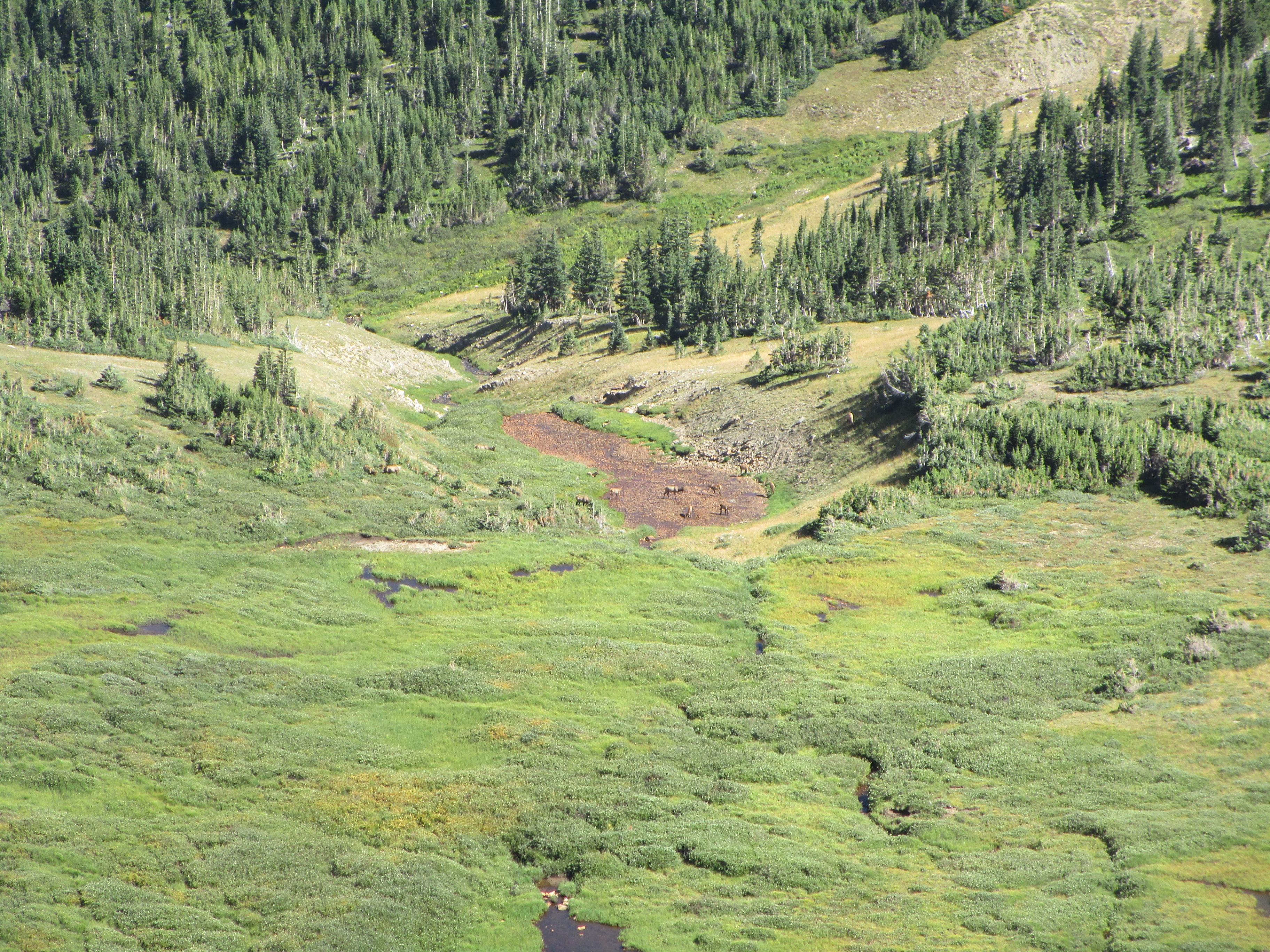 At the end of the day, returning to Estes Park on US Route 34, we spotted a moose!  The moose was on the south side of the road, behind some wildlife fencing just west of the park entrance.  I never could get a clear shot of its face, as it obscured its head behind the brush it was eating. 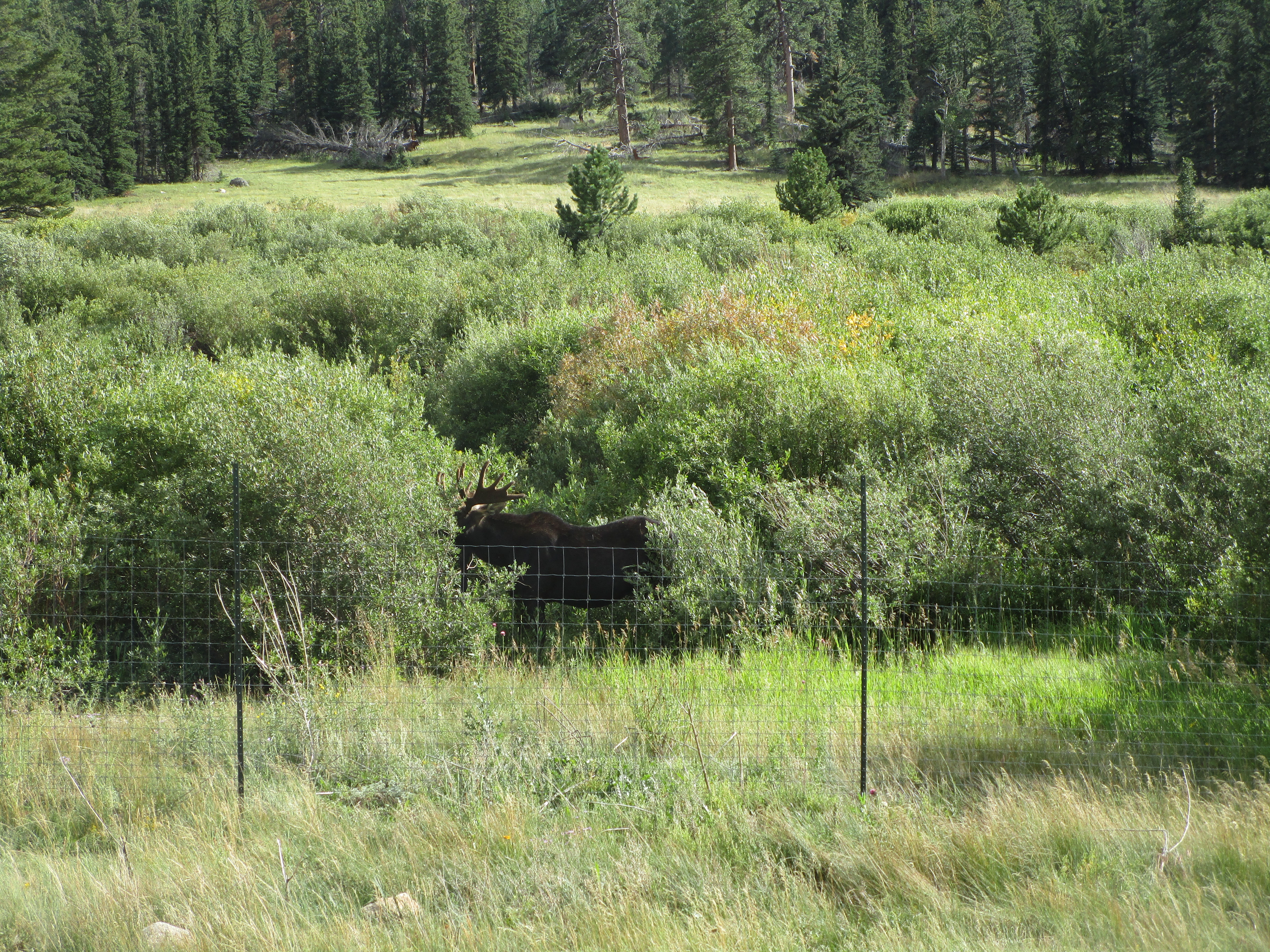 Part 3: The Hike Up Estes Cone

I always try for one mountain hike on each excursion to a national park, but I opted for a smaller one this time, owing to the fact that we were not seasoned veterans to high altitudes or steep mountain hikes.  The hike to Estes Cone was about three and a half miles in one direction.  It departed from the Longs Peak Trailhead, but there was no way we were going to try to summit Longs Peak, the tallest peak in all of Rocky Mountain National Park.  Estes Cone, a lighter option, is not even really a cone.  It's not a volcano of any status, despite what the word "cone" might imply.  It's just a mountain with a fairly round top. Views from the top aren't the absolute best in the area, as Longs Peak and Twin Sisters Peak are nearby and noticeably taller.  But they are nice views! 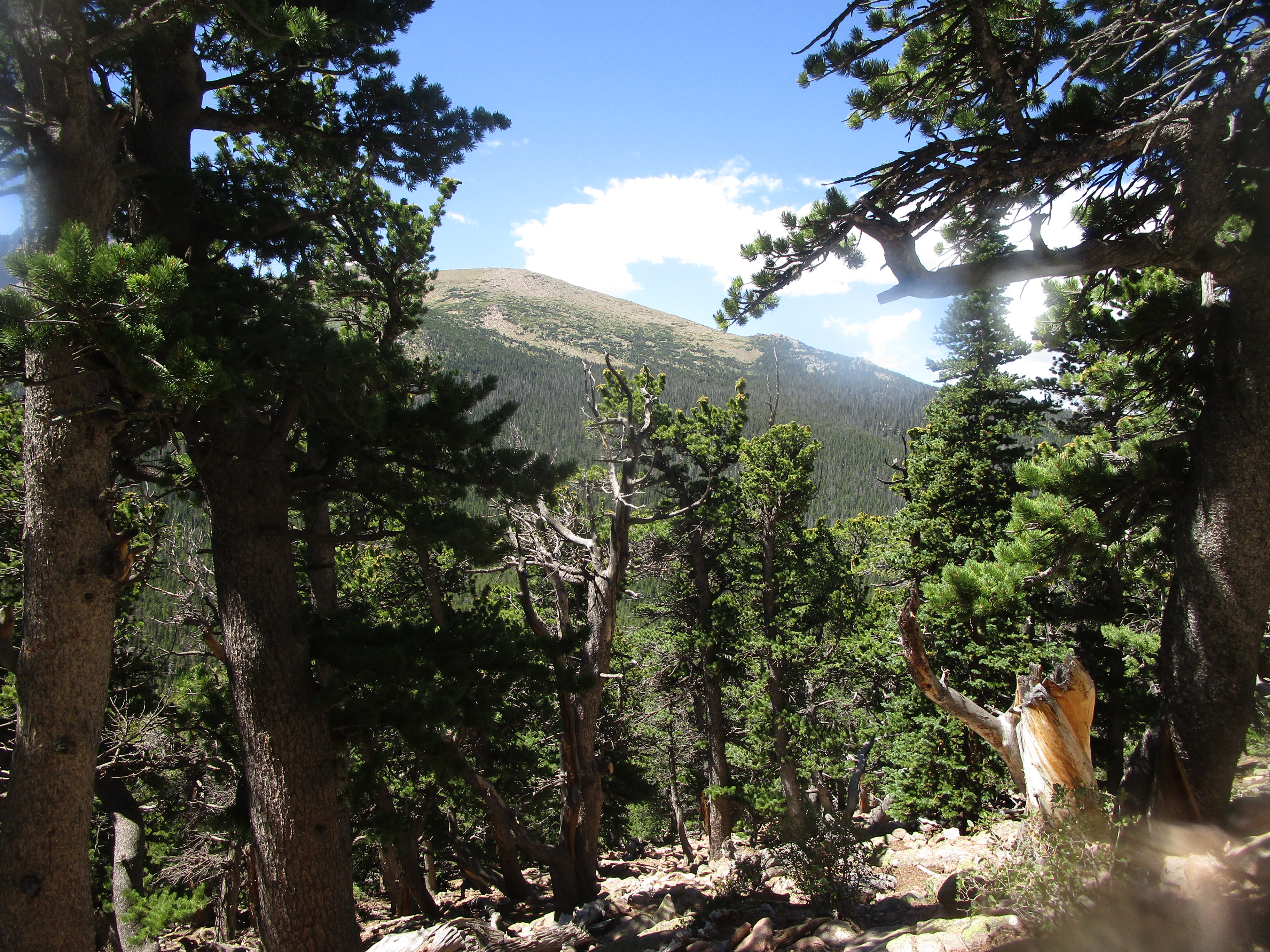 The next morning, we set out for the Bear Lake area of the park.  This area is extremely popular, and a Park and Ride had to be established with buses taking hikers to the trailheads.  Good luck finding any parking at the trailheads after 6 A.M.  Seriously.  Instead, park at the large Park and Ride lot, and use one of the convenient and frequent buses!  My visit to the Bear Lake area consisted of a hike past Dream Lake to Emerald Lake, and then continuing to Lake Haiyaha.  All three are crystal-clear, beautiful mountain lakes, with the exception of Lake Haiyaha's cloudy blue-green waters. 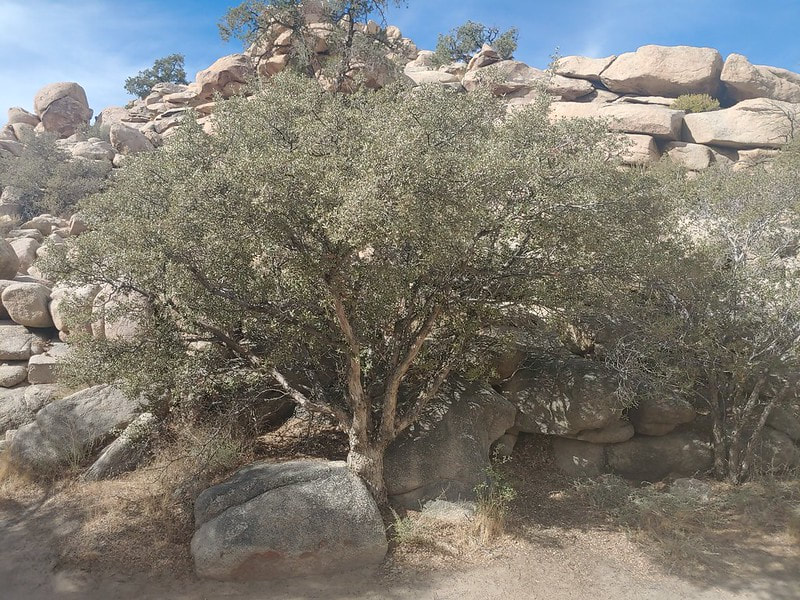 The Bear Lake area of Rocky Mountain National Park is an extremely popular area for hiking. It's so popular that you have to apply for a special permit to get to the Bear Lake area. Don't fret, though; the admission is only two dollars, as the ticketing system is strictly for crowd-control purposes. Tickets to reach Bear Lake and the surrounding area are acquired at www.recreation.gov .  On the way to Emerald Lake, we came across an intermediary lake called Dream Lake.  That lake was already beautiful enough!  Here are some images of Dream Lake, including the trout that could easily be sighted through the clear waters. 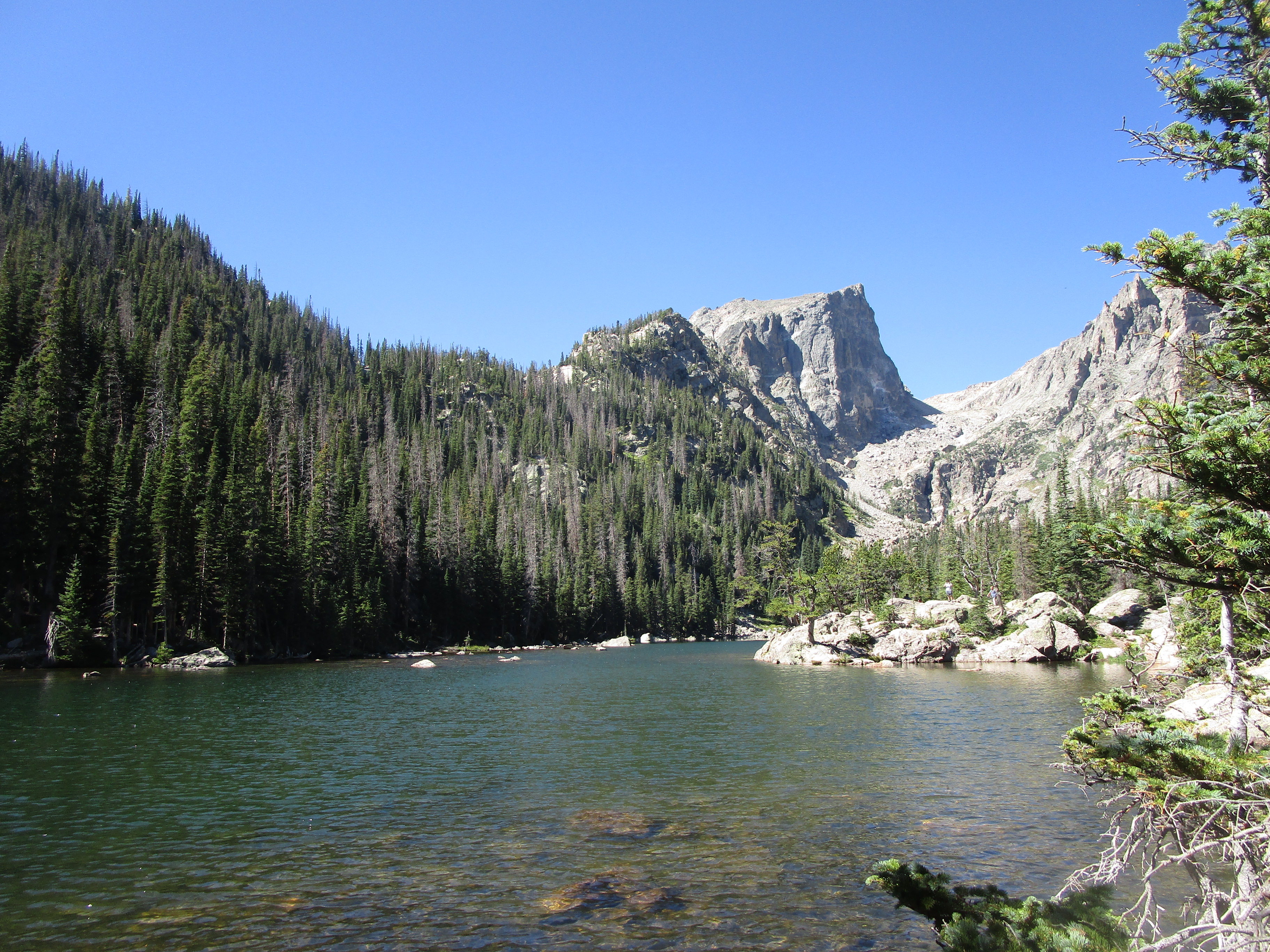 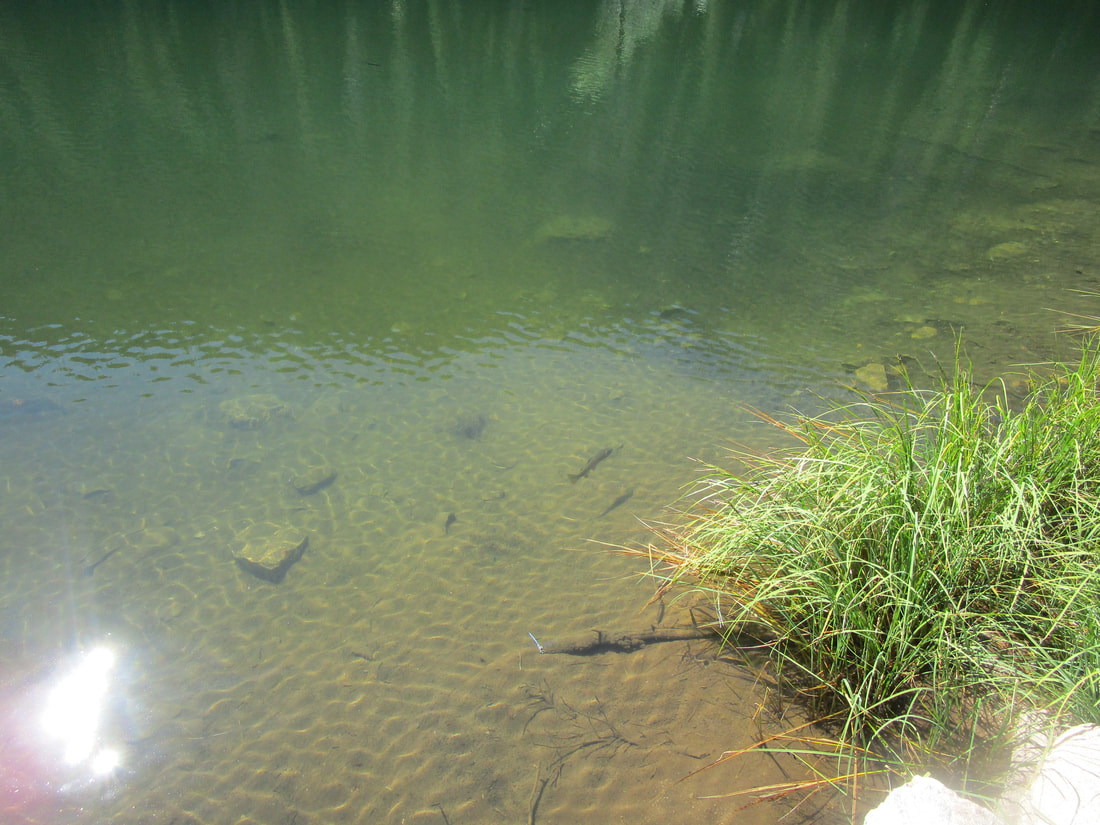 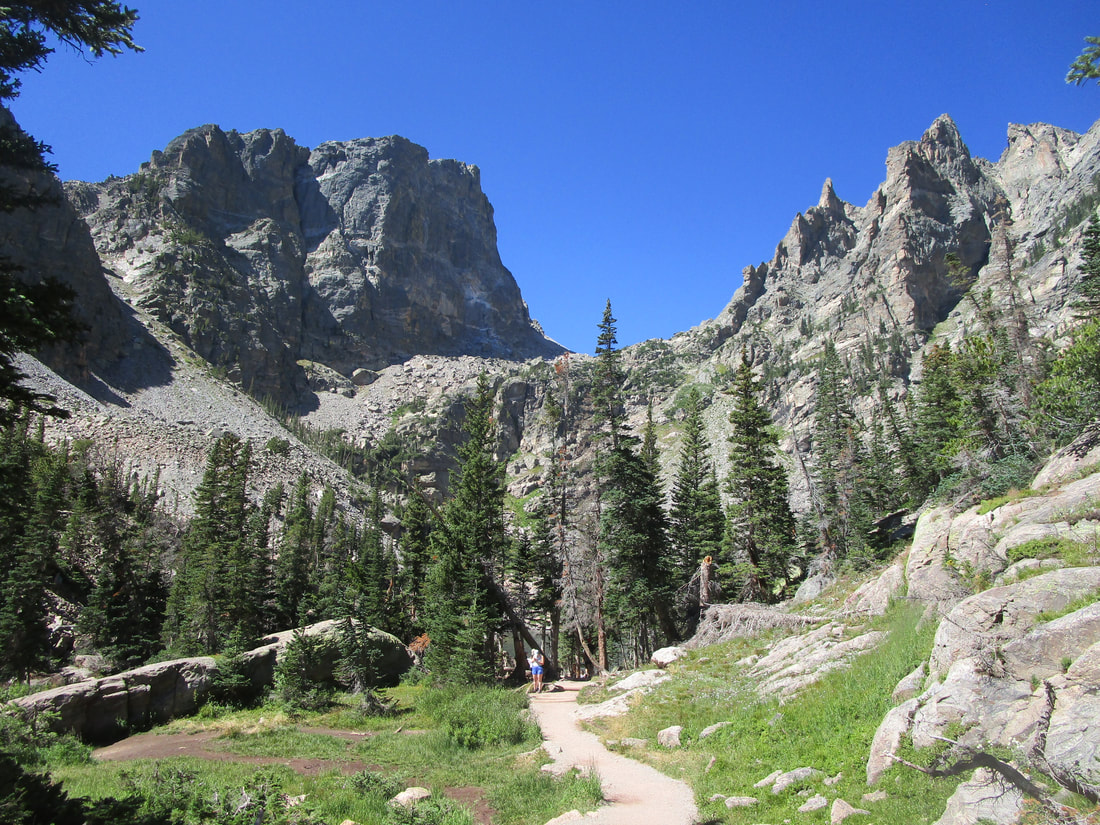 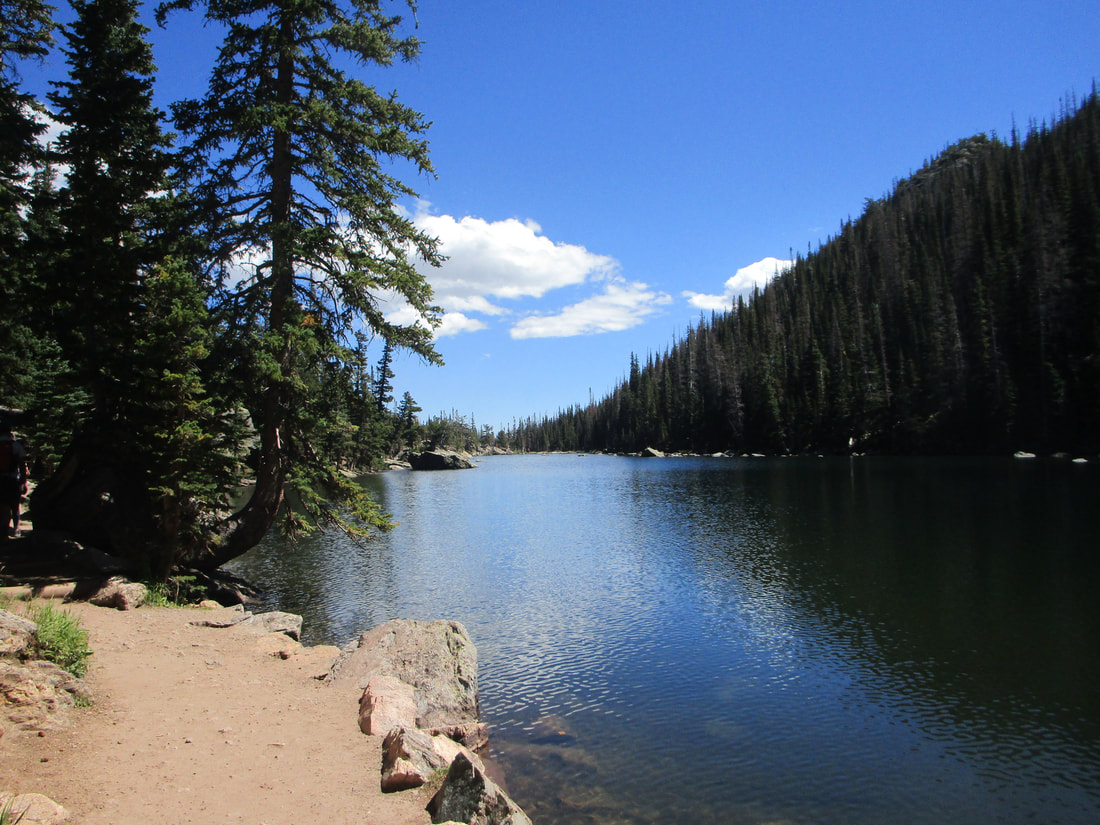 After passing by Dream Lake, we reached Emerald Lake!  But I was too busy looking at a marmot who was curious about the hikers breaking for lunch.  More specifically, he was probably interested in their food.
Anyway, here's what Emerald Lake actually looked like: 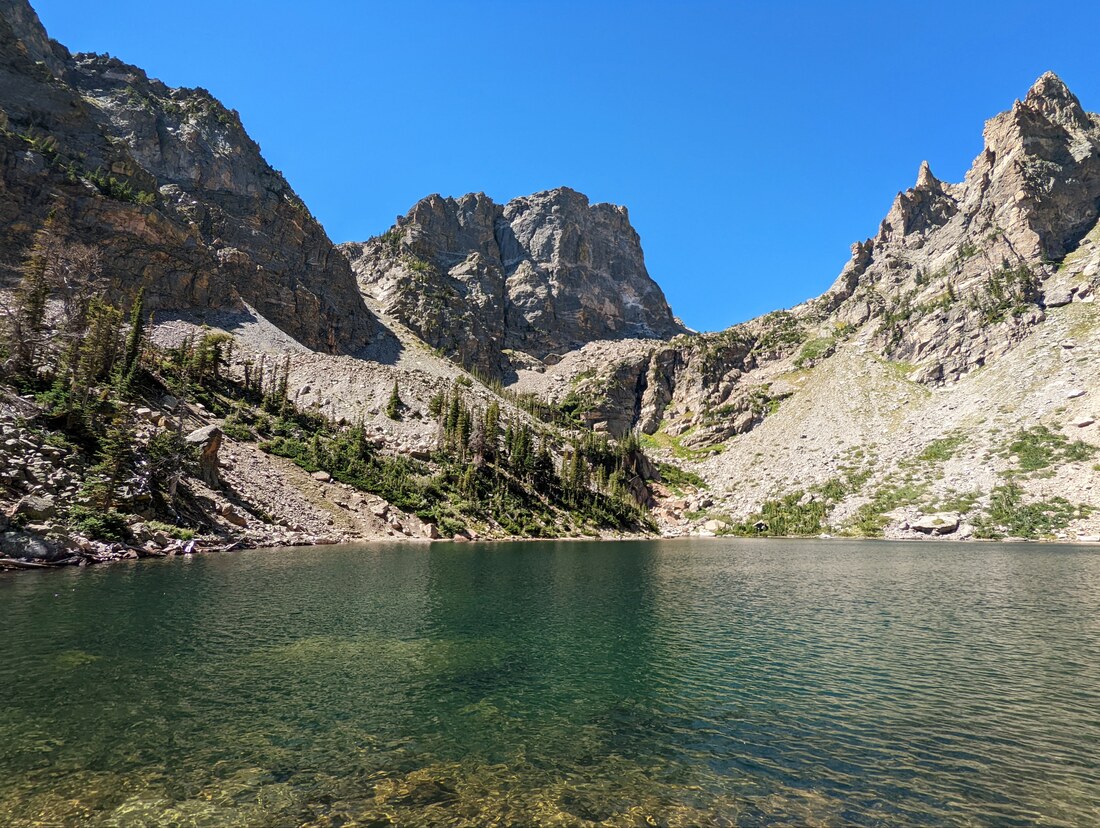 We backtracked to the fork at Dream Lake, and took the other branch of the trail onward to Lake Haiyaha, notable because of its cloudy turquoise waters.  But soon after embarking on this branch of the trail, we came upon a young adolescent elk standing on the trail, looking at us curiously. 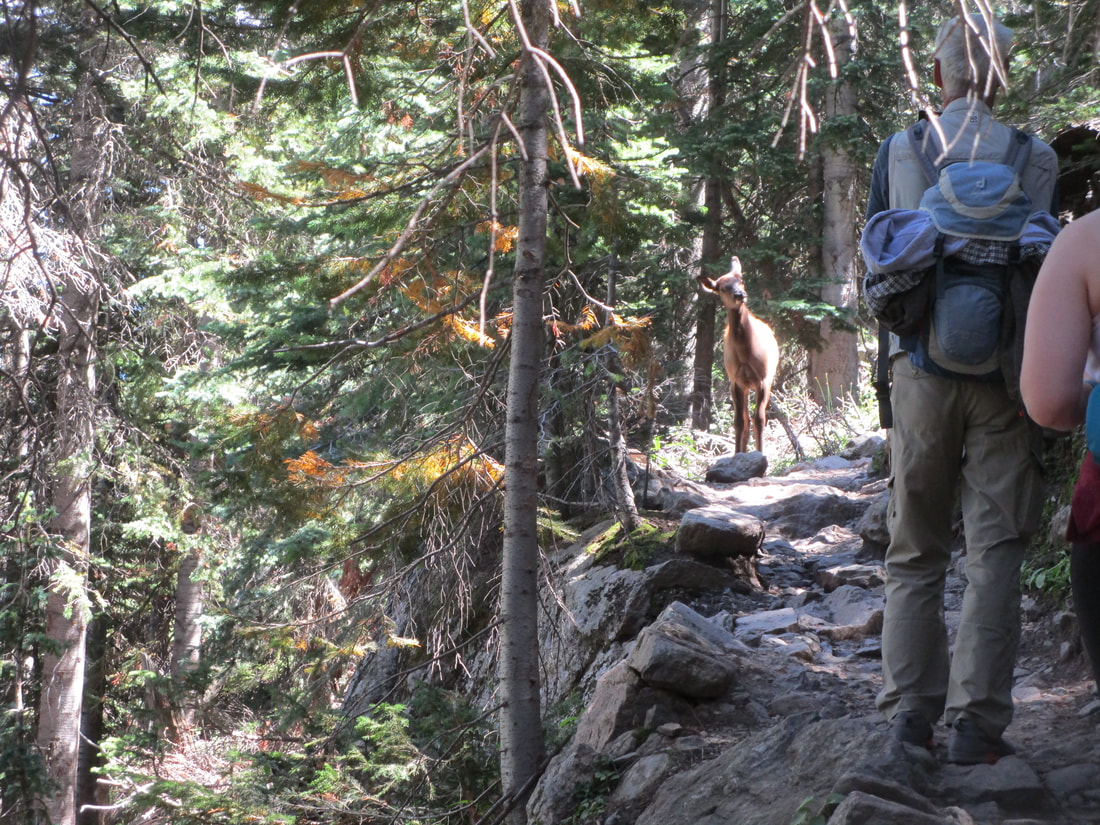 We soon came across that young elk's mother and its sibling, plus overlooks with increasing splendor as we increased in elevation along the trail:
Just before the trail reaches Lake Haiyaha, the outflowing stream crosses the trail, foreshadowing the opaque turquoise appearance of the lake's mineral-rich waters.  That high concentration of minerals gives the waters their milky blue-green appearance.

And now for our feature presentation: the uniquely colored Lake Haiyaha! Completing the last few hundred feet of the trail requires hopping across some large rocks.  The trail won't be perfectly even here, but the rocks are stable and large enough.  You will be easily able to find good places to put your feet as you make your way right up to the lakeshore. 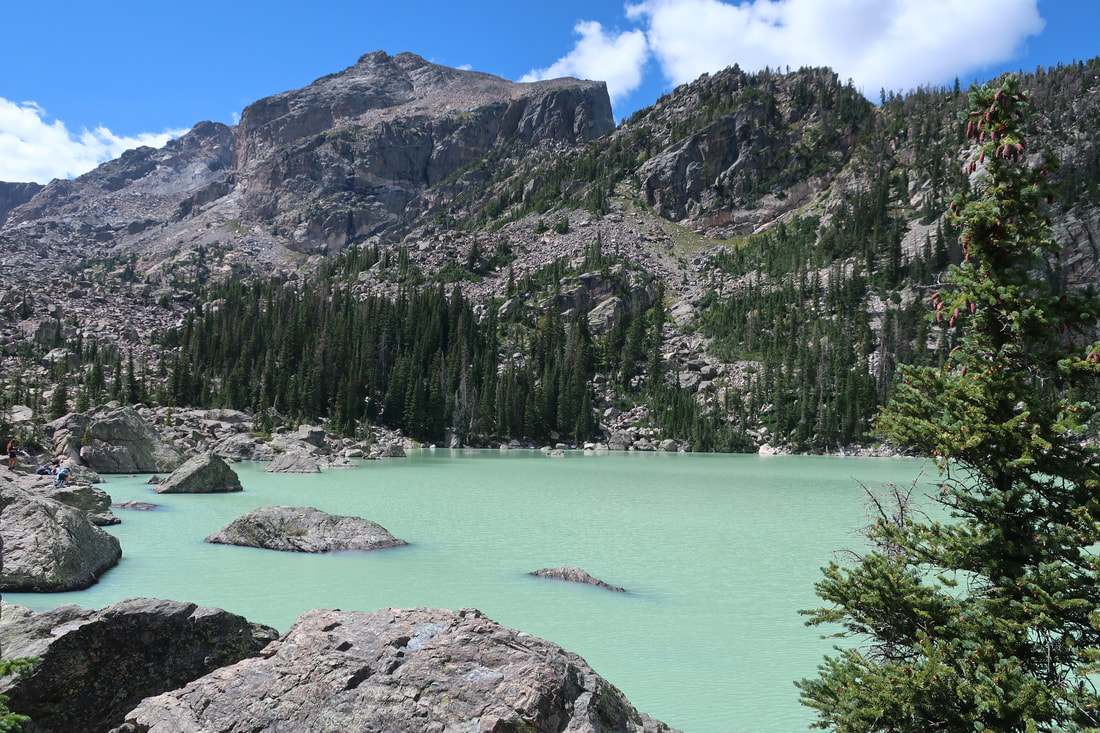 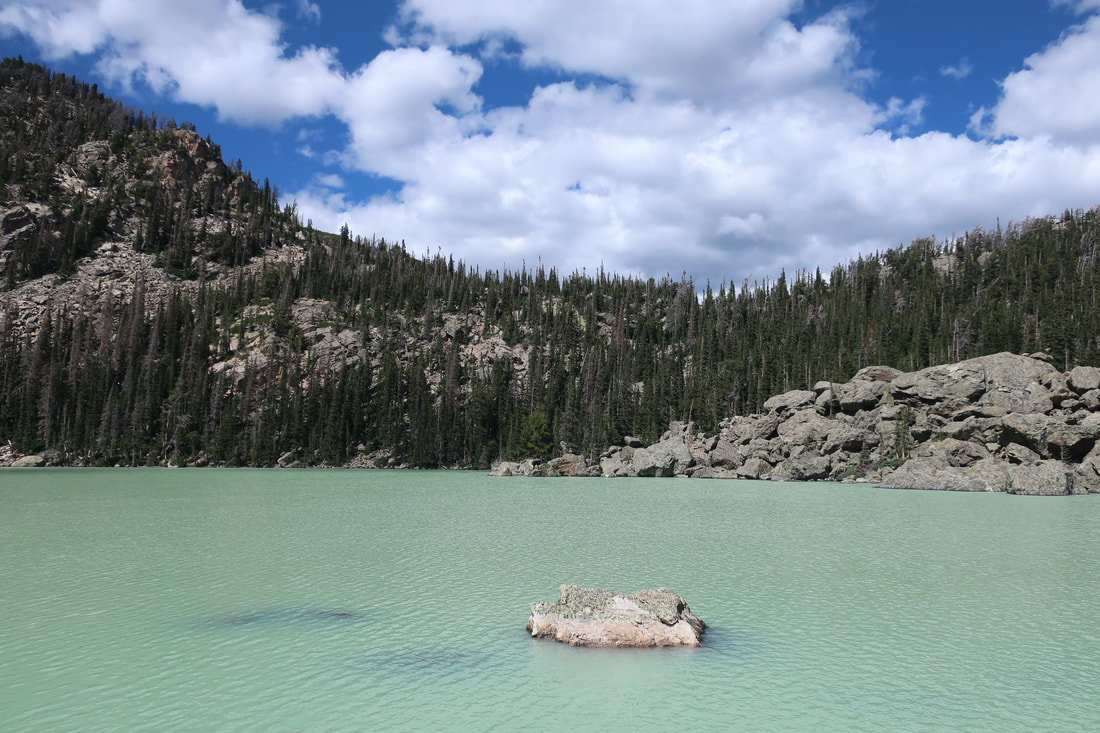 After visiting these lakes in the Bear Lake region of the park, it was time to leave.  But we left by driving straight through the park, ascending to 12,000 feet in elevation and coming back down. Here are some views from the main road through the park, to conclude this page. 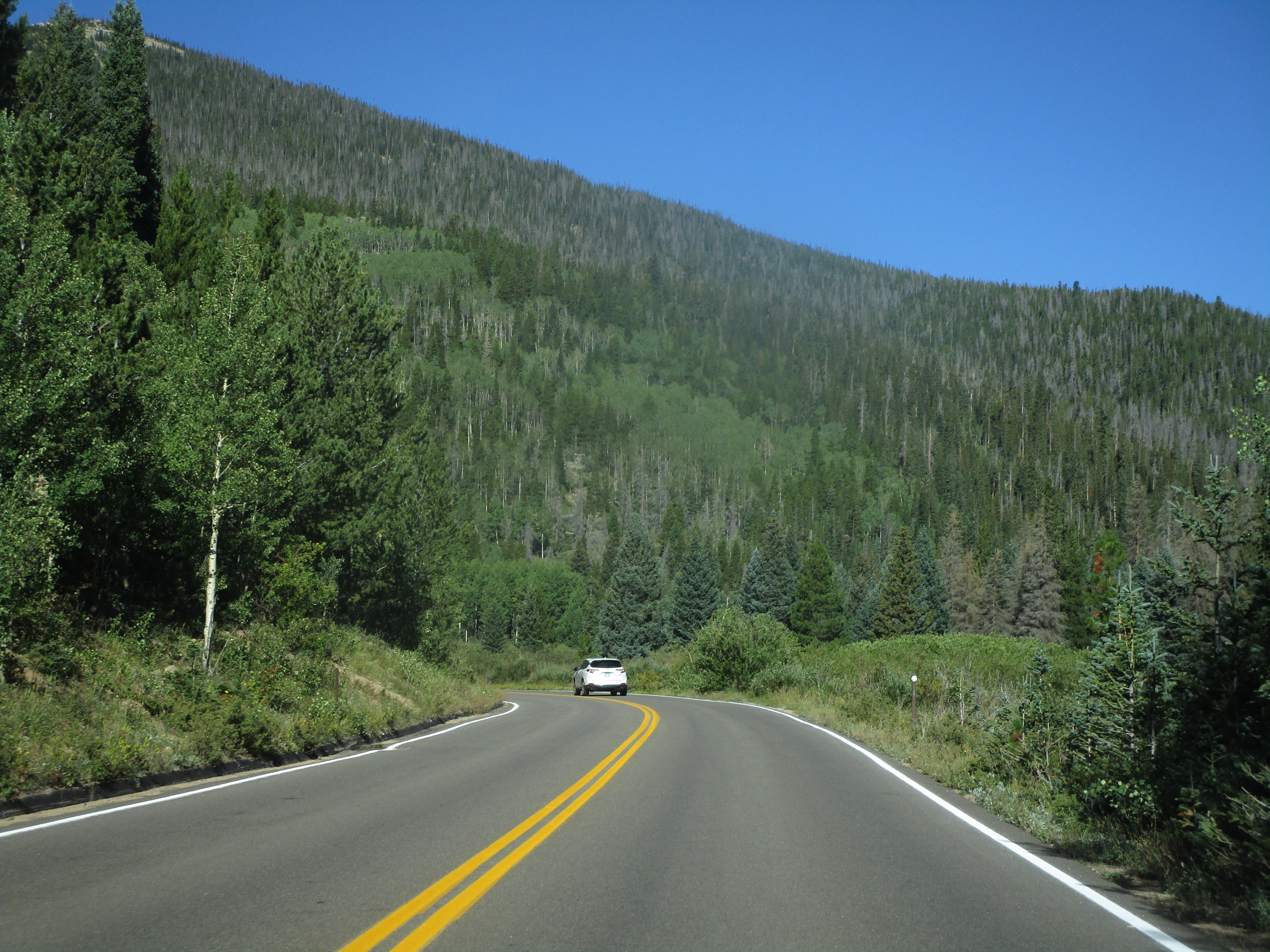 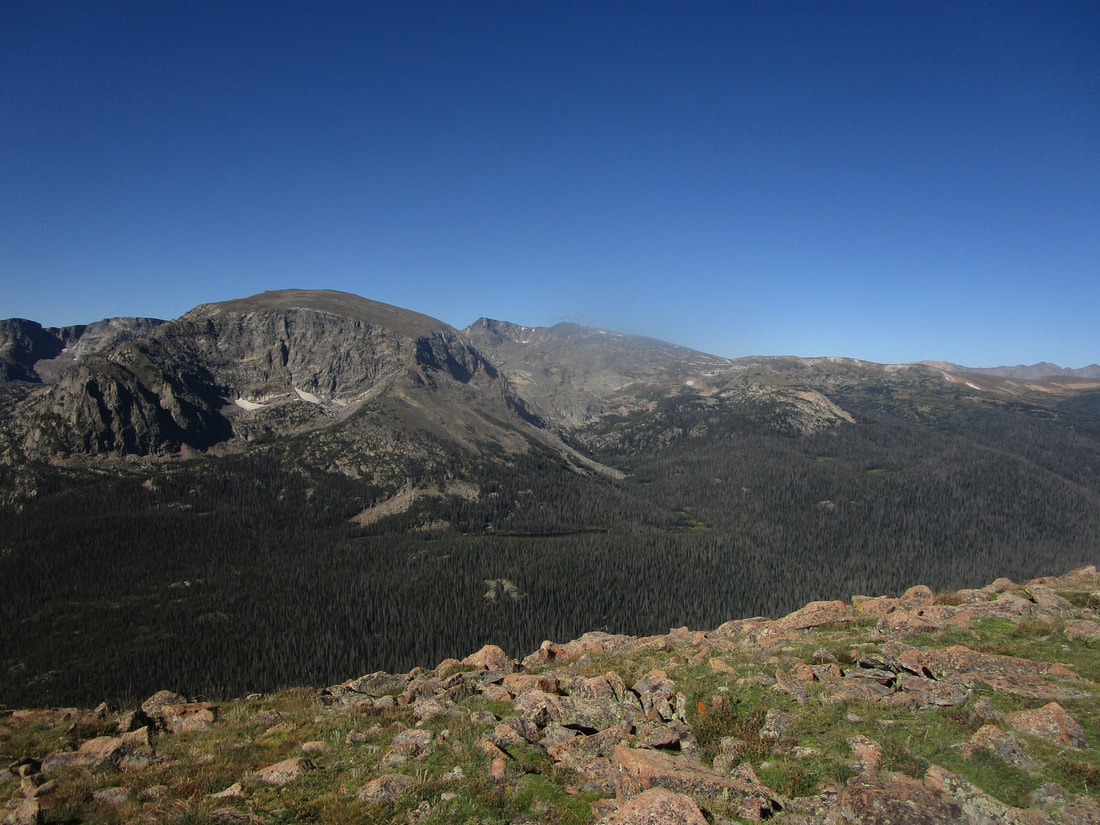 We stopped at Holzwarth Historic Site, an old former dude ranch with standing cabins that visitors can enter to observe a piece of Rocky Mountain history.  The beginnings of the Colorado River flow through here.  It's wild to think that this river will soon flow through Lake Mead and serve as the major river border between Arizona and California: 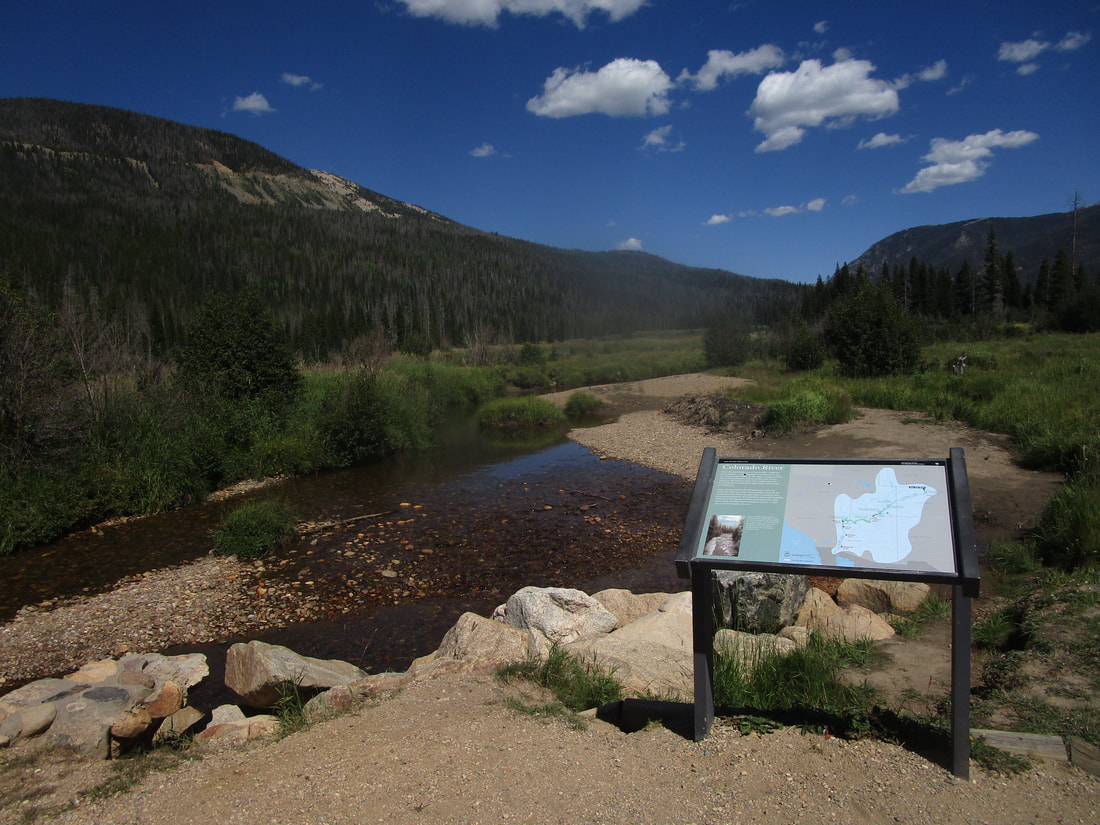 Sadly, much of the western end of the park was ravaged by a wildfire about five years ago, totally ruining the tree canopy, among other things.  This scene was photographed right alongside the western entrance station into Rocky Mountain National Park. 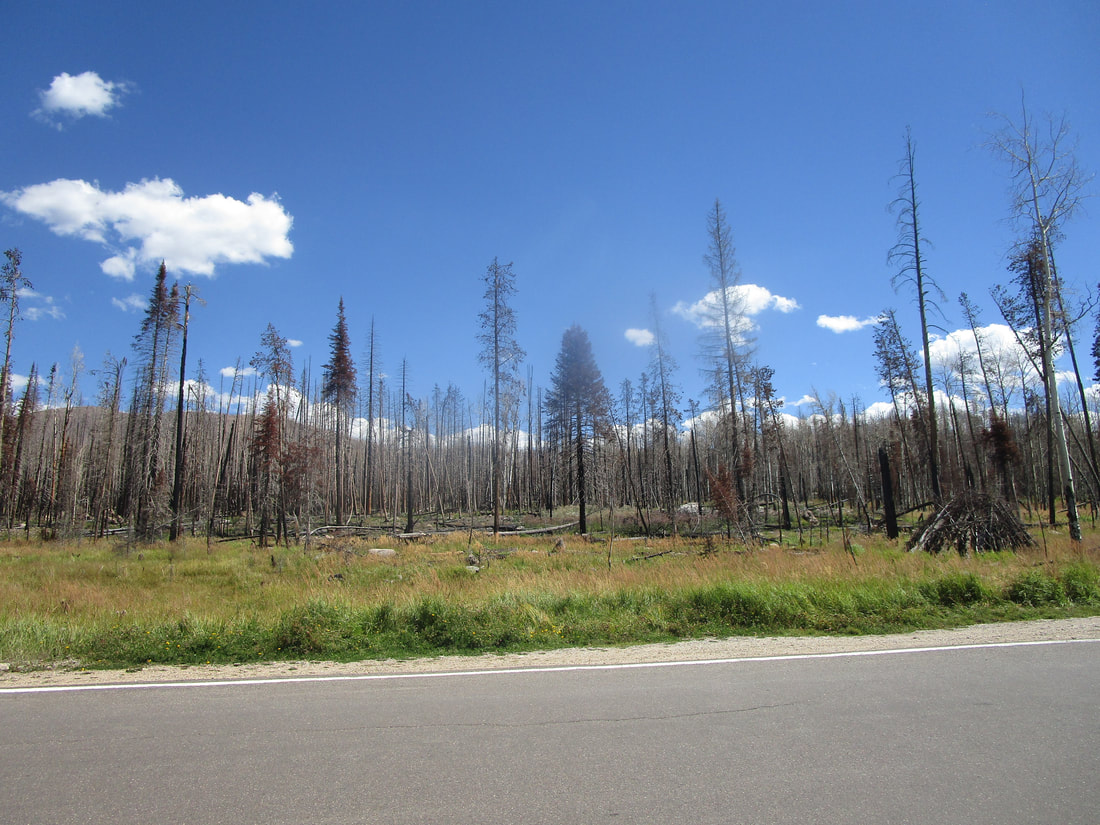 To avoid ending on a sad note, get a look at this marmot contemplating all of existence, looking out just as I was over the Forest Canyon Overlook!  Maybe he was just looking out for predators.  But it was a joy to spot him on that pedestal of a rock looking out over the canyon.  Maybe he saw the humans above looking out at the scene, and he wanted to try to figure out what we were all staring at. 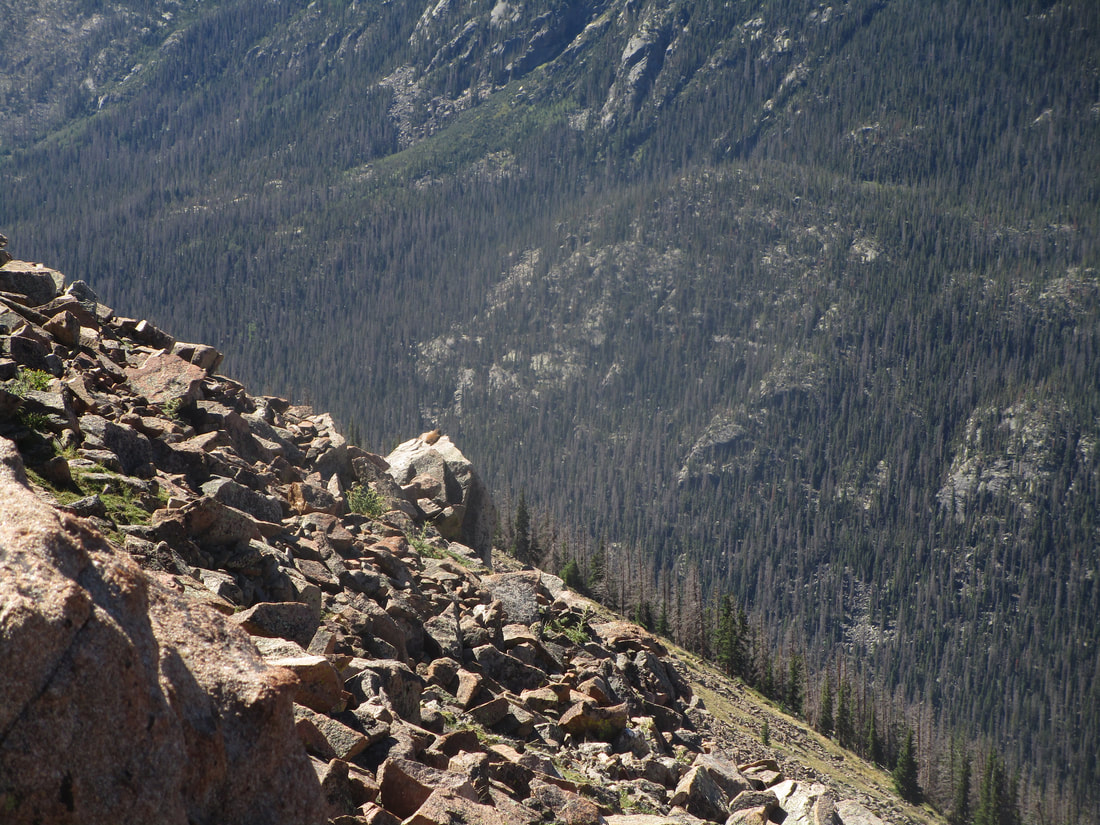