Iowa Route 100 is a newer four-lane divided highway wrapping around the northern and northwest sides of Cedar Rapids.  The western half is a fully-formed freeway, heading west from its central volleyball interchange with Interstate 380, through a curve to the south, to a terminal interchange at US Route 30 (concurrent with US Route 218). The eastern half is a surface road with signalized intersections through Marion, Iowa-- but this surface road didn't stop being a four-lane divided highway.  And indeed, the eastern end is also a signalized intersection as well, at US Route 151's duplex with Iowa Route 13. 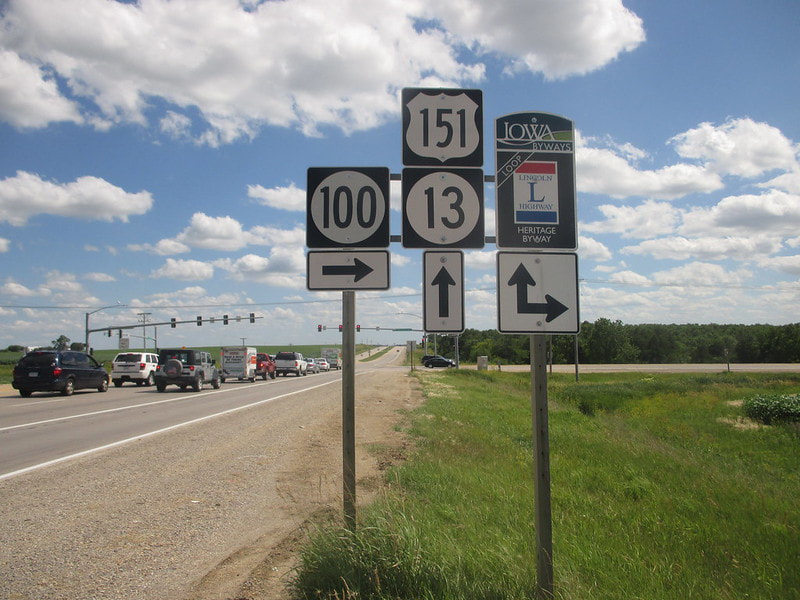 My photo of Iowa Route 100 signage comes from its eastern terminus, where Iowa Route 100 meets the concurrency of Iowa Route 13 and US Route 151.  Like many of the major intersections along Iowa's four lane highways, this intersection is one with ridiculously offset, ridiculously long mast arms.  The signage depicted faces north for southbound traffic on US Route 151 and Iowa Route 13. The photo comes from July 1, 2017, along the trip across eastern Iowa (the word "eastern" is used somewhat loosely).
Back to the Iowa main page.
Back to the home page.