PAUL ACROSS AMERICA
US Route 209 goes from the middle of Pennsylvania, northeast to a point in small-town southeastern New York, upstream from New York City, along the Hudson River.  The southwestern end is in Millersburg, Pennsylvania, at a state highway.  This endpoint at Pennsylvania Route 147 mainly occurs because the north-south course of the Susquehanna River prevents US Route 209 from proceeding farther westward (in other words, I'll forgive the termination of a US route at a state route just this once).  From Millersburg, US Route 209 heads east-northeast to Stroudsburg, the town where Interstate 80 meets the border between Pennsylvania and New Jersey.  US Route 209 never enters New Jersey, though; instead it slides northeastward in Pennsylvania following immediately alongside the state border, formed by the Delaware River.  Alongside the northern tip of New Jersey, US Route 209 crosses into New York.  The northeastern endpoint occurs at US Route 9W, US Route 9's affiliated route on the west side of the Hudson River.  This endpoint is in Lake Katrine, New York, just north of Kingston. 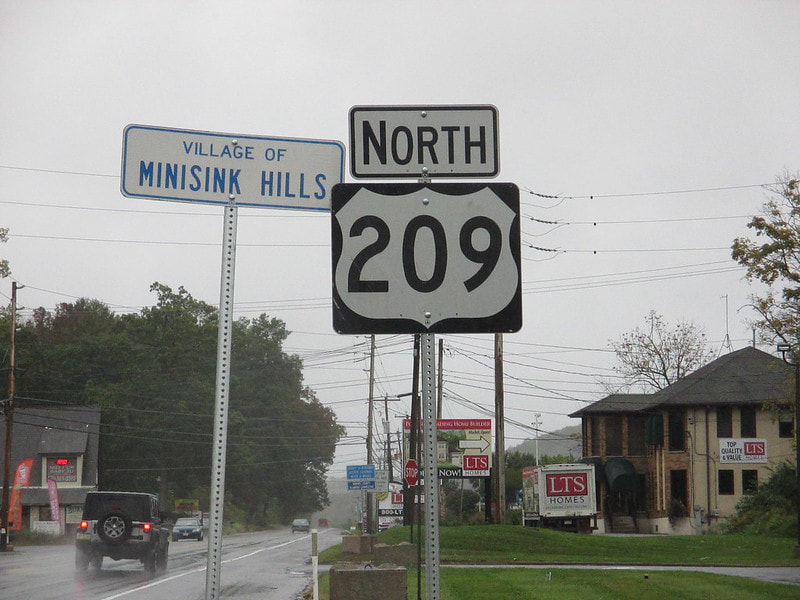 My photo for US Route 209 is the northbound trailblazer seen as vehicles exit Interstate 80 onto the route.  The photo was taken right alongside Stroudsburg, Pennsylvania, on a rainy morning in October 2015.  The stop to take this photo was part of the trip to the Northeastern States. Around Stroudsburg, US Route 209 joins Interstate 80 east for a bit; the sign shown sits at the eastern end of the concurrency.  Pennsylvania uses a different for the numerals on their highway signs, and a few of them are shown here.
Back to the nationwide main page.
Back to the home page.