When devising the mile numbering system for Interstate 474, it was imagined as an east-west highway, since it's an alternative to an east-west highway.  Therefore, the exit numbers and mileage numbers start in the northwest and increase toward the southeast.

Interstate 474 starts at Interstate 74 just west of Peoria, at an interchange that also marks the southern start to Illinois 6. Exit 0A leads to Interstate 74 east, toward Peoria:
Exit 0B allows traffic to continue west onto Interstate 74, toward Moline-Rock Island; the continuation of the freeway northward leads to Illinois 6, which brings travelers toward Chillicothe:
Exit 3A leads to a spur westward, that may someday become the eastern end of Illinois 336, or a road necessitating an "Exit 3B". For now, it connects to Maxwell Road, which is a link to Illinois 116 and, by extension, Farmington: 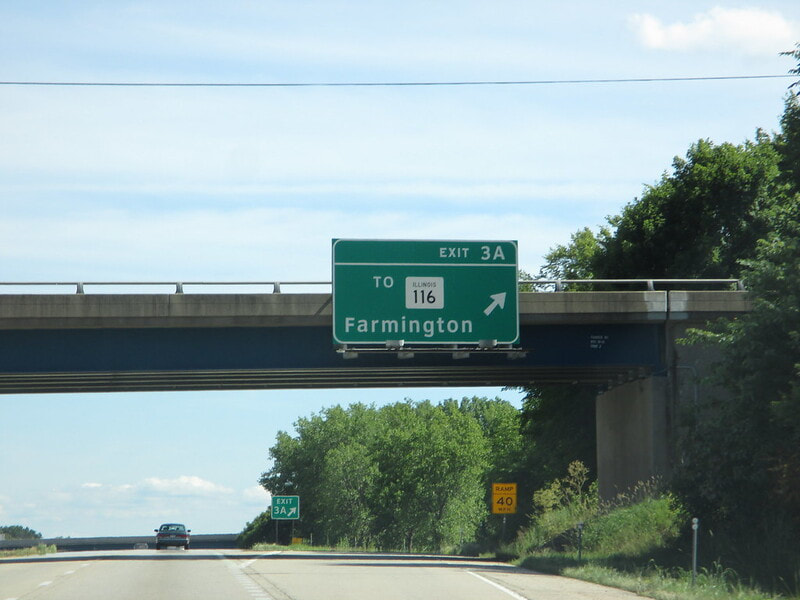 Exit 5 is a fountain interchange to Airport Road, another way to access Illinois 116 indirectly:
Exit 6 leads to Adams Street, which leads US Route 24 west into Bartonville-- US Route 24 comes from the west and joins Interstate 474 east here:
After crossing the Illinois River, exit 9 sends US Route 24 east along Illinois 29, and provides access to Illinois 29, Pekin, and East Peoria:
Interstate 474 reaches its southeastern end, continuing onto Interstate 74 eastward toward Indianapolis, but an "Exit 15" is signed, pointing to a ramp off to the left for Interstate 74 west to Peoria:
Back to the Illinois main page.
Back to the home page.