PAUL ACROSS AMERICA
Interstate 93 runs from the Boston area north through New Hampshire to St. Johnsbury, in northeastern Vermont.  Its southern end is an interchange with Interstate 95 near Canton, Massachusetts, which is just southwest of Boston. From there, Interstate 93 runs east for a bit before turning north through downtown Boston.  In downtown Boston, Interstate 93 was relocated to a series of underground tunnels, comprising an immensely expensive public works project known as "The Big Dig".  Removal of obstructive freeway viaducts from the above-ground landscape made for a beautification of the downtown Boston experience, as well as the green spaces established on top of the tunnels (see more in the text section under the photo).  Anyway, Interstate 93 continues north out of downtown Boston into New Hampshire, while Interstate 95 angles northeastward on a path near the Atlantic Coast.  Interstate 93 spends more mileage in New Hampshire than in any other state, serving Manchester and Concord.  It continues north into central New Hampshire; when it gets to the northern part of the state, it has a section with only one lane in each direction through the Franconia Notch State Park area, making it technically undeserving of an Interstate designation. In northern New Hampshire, it angles slightly westward to St. Johnsbury, Vermont, where it can connect with Interstate 91, which continues north to Canada. The northwestern end at Interstate 91 in St. Johnsbury is only eleven miles into Vermont. 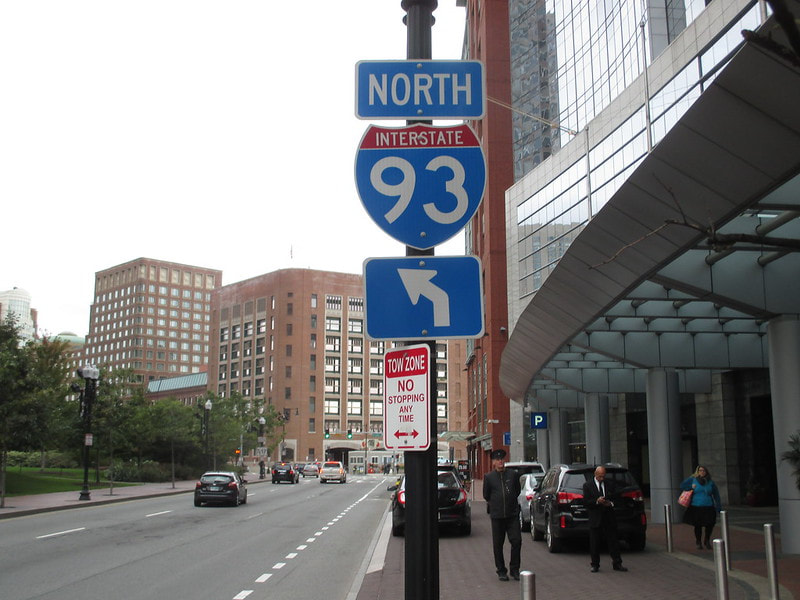 The photograph I took for my Interstate 93 marker was taken at the corner of Atlantic and Pearl Streets in Boston. Atlantic Street flanks the eastern edge of Interstate 93, which is underground in a tunnel capped by a green space visible on the left side of the photo.  The aperture looks north along Atlantic Street, and its intersection with Seaport Boulevard is visible in the photo's background.  An onramp to Interstate 93 northbound splits off to the left just beyond the intersection with Seaport Boulevard; that's what this sign assembly is trying to communicate. Interstate 90 is just to the south of here. I took this photo walking around Boston, during part of my October 2015 trip to the northeastern states.
Back to the nationwide main page.
Back to the home page.