PAUL ACROSS AMERICA
US Route 54 runs from west-central Illinois west and southwest through central Missouri, Kansas, and central New Mexico before ending just south of New Mexico's southern border, in El Paso, Texas.  US Route 54 also clips southwesterly across the Oklahoma and north Texas panhandles.  US Route 54 once extended northeasterly all the way to Chicago, but it was truncated to an interchange with Interstate 72 and US Route 36 near Griggsville, Illinois.  US Route 54 runs diagonally northeast-southwest, except for its portions in western Missouri, eastern Kansas, and central Kansas.  The westernmost portion of US Route 54 actually runs north-south, turning from southwesterly to southerly in central New Mexico.  Its western end is more of a southern end, and it sits at an interchange with the Loop 375 freeway, which follows along the Rio Grande River and Mexican border, in El Paso, Texas.  The short Interstate 110 spur in El Paso essentially carries US Route 54 south from Interstate 10 to that penultimate interchange. 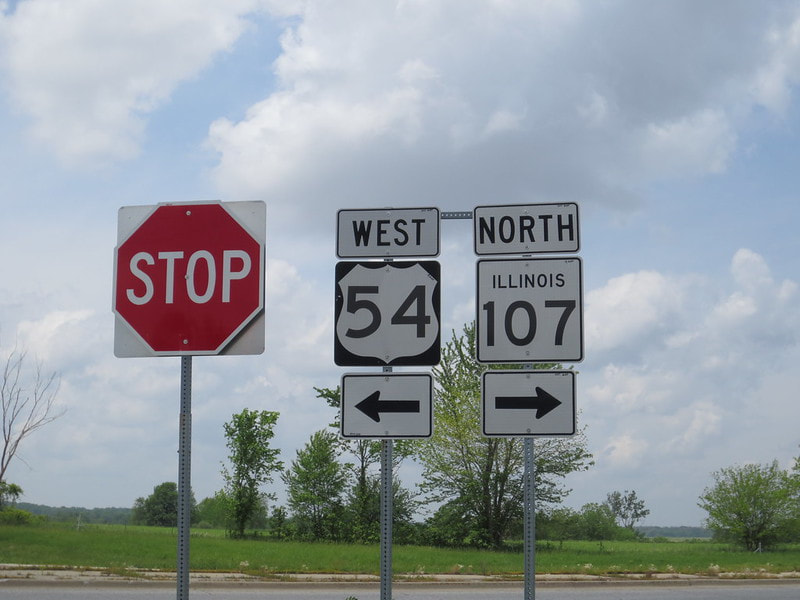 My photo of US Route 54 comes from its northeastern endpoint in west-central Illinois.  The sign assembly depicted faces east, at the culmination of the western offramp from Interstate 72 and US Route 36.  That offramp is part of the interchange near Griggsville, Illinois, where the roadway carrying US Route 54 north becomes the roadway giving Illinois Route 107 its southern start.  I took this photo embarking on my first-ever roadtrip dedicated to my national route collection, en route to the St. Joseph, Missouri area in May 2014.
Back to the nationwide main page.
Back to the home page.