PAUL ACROSS AMERICA
US Route 79 is a diagonal northeast-southwest route in the mid-South and south-central regions of the United States.  The northeastern end is at US Route 68 in Russellville, Kentucky, and the southwestern end is in Round Rock, Texas (just north of Austin).  US Route 79 passes through cities like Shreveport, Louisiana; Pine Bluff, Arkansas; and Memphis, Tennessee.  It cuts diagonally southwest, covering ground in west Tennessee, a lot of mileage and Arkansas, a small amount of northwest Louisiana, eastern Texas, and central Texas.  The southwestern end in Round Rock, Texas, is an interchange with Interstate 35.  US Route 79 violates the numbering system for much of its length, but with any diagonal route, it really can't be helped.  The Interstate 35 corridor in central Texas used to be the US Route 81 corridor, and they gave this route stemming east from there the next odd number lower than 81.  That meant that the number of US Route 79 fit the grid of numbers properly in central Texas, and as long as the number on a diagonal route fits the numbering convention for some of its length, that's as good of a situation you can ask for. 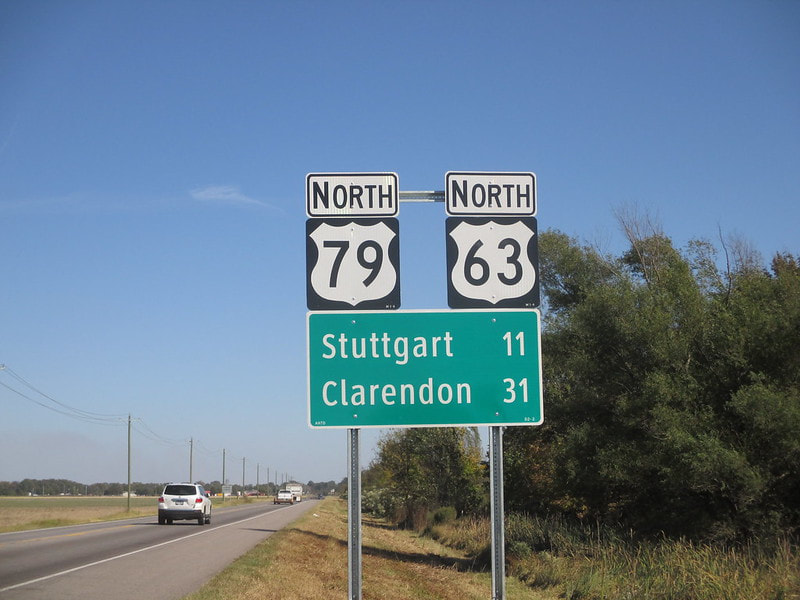 My photo for US Route 79 is a northbound trailblazer for the concurrency of US Route 79 and US Route 63 in Humphrey, Arkansas.  I used US Route 79 from Pine Bluff to Stuttgart in Arkansas on my way home from the October 2014 trip, when I went to the Gulf Coast of Alabama and the San Antonio area.  This sign assembly faces southwest toward traffic heading northeast, coming off of the junctions with Arkansas Highway 13 and Arkansas Highway 152.
Back to the nationwide main page.
Back to the home page.